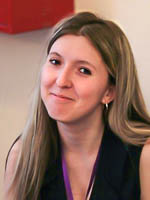 A.V. Penkova has been the head of the 25 grants. Some of them are listed below:

Member of the Editorial Board of the international Journals