The Natural Products Chemistry Division led by Prof. Mikhail Krasavin received a research grant under the joint program by the Russian Foundation for Basic Research (RFBR) and the German Research Foundation (DFG) to work on the project titled 'Spirocyclic scaffolds as fatty acid mimetics for improved solubility, bioavailability and selectivity'. The project is a joint undertaking with the Goethe University Frankfurt team lead by Prof. Eugen Proschak.

"Spirocycles have been receiving special attention recently in the context of drug design. They have a pronounced three-dimensional shape which allows one to find an optimal molecular periphery to make the new drug molecule bind to its protein target with maximum efficiency and selectivity. Spirocycles carry a number of advantages compared to, say, flat aromatic heterocycles which are traditional building blocks for medicinal chemistry. Using spirocycle as a scaffold for the future drug molecule, one can achieve a better solubility, bioavailability and even metabolic stability," — Professor Krasavin commented. The project will continue for 3 years.

BELLINGHAM, Washington, USA – 15 May 2020 – Aleksei Smirnov has been awarded a 2020 Optics and Photonics Education Scholarship by SPIE, the international society for optics and photonics, for their potential contributions to the field of optics, photonics or related field.

Researchers at Saint Petersburg University developed a method for eliminating the overpoweringly unpleasant odor of isocyanides, an important class of organic compounds. The suggested approach makes storage of these substances safer and more convenient while preserving key chemical properties that make isocyanides essential in many synthetic applications, such as the production of pharmaceuticals and functional materials. The research, supported by the Russian Science Foundation (projects 19–13–00008 and 19–73–00001), appears in Nature Communications.

Isocyanides are an important class of organic compounds owing to a wide range of chemical transformations they can undergo. These molecules are employed for the synthesis of various pharmaceuticals, polymers, catalysts, and luminophores. Widespread use of isocyanides in chemistry and chemical industry is, however, hampered by their extremely foul odor, described by some researchers as “mind-boggling”, “horrid” and even “murderous”. Luca Turin, one of the leading experts in fragrance chemistry, called isocyanides “the Godzilla of scent”. This odor is so terrible that the United States patented the use of isocyanides (generally low on the toxicity scale) as a non-lethal chemical weapon.

While studying isocyanides, chemists from Saint Petersburg University discovered the ability of these compounds to form adducts with certain iodine-containing organic compounds. The components of the adducts are connected noncovalently by so-called halogen bonds. The latter by their nature resemble hydrogen bonds, which connect the two strands of the DNA double helix. 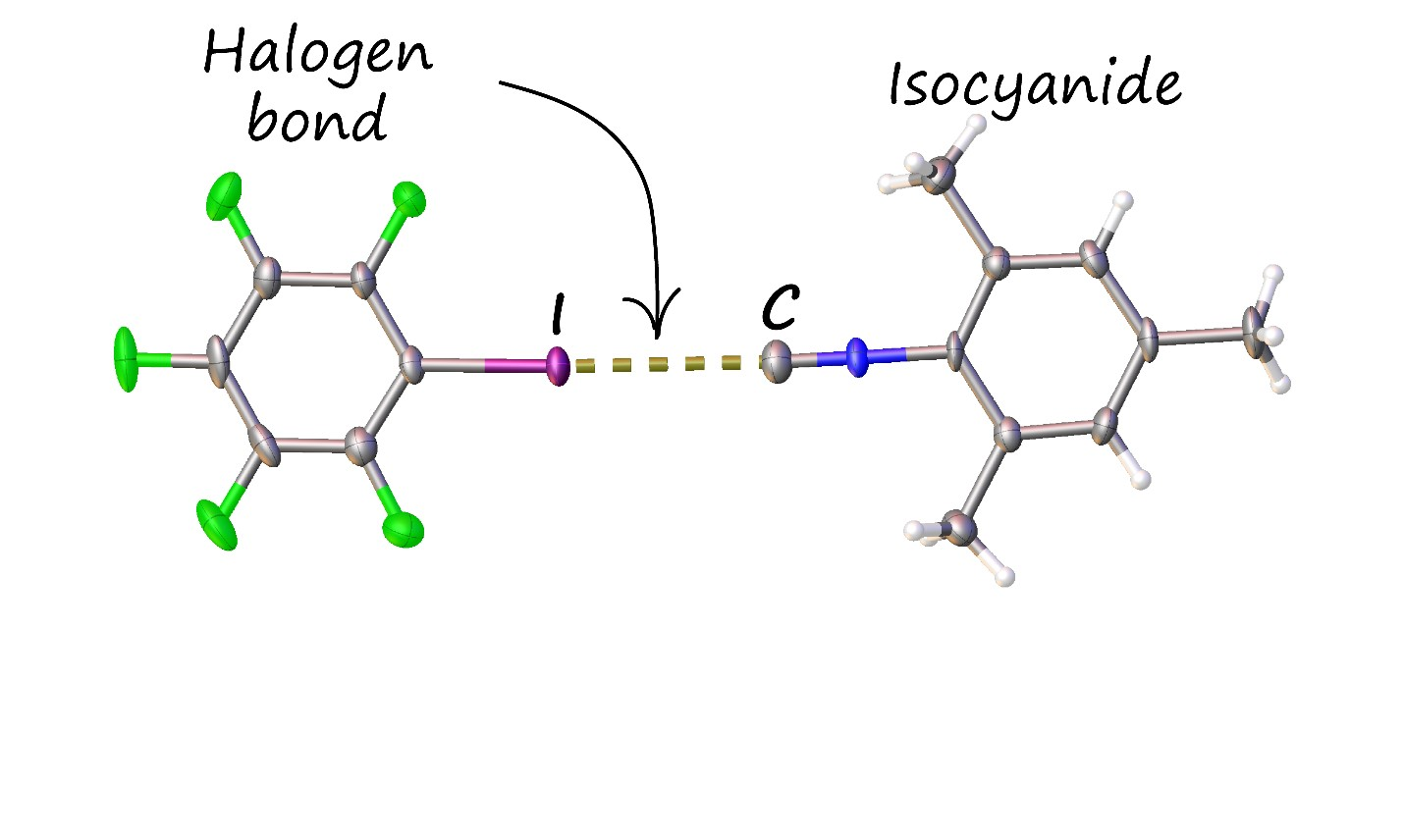 The structure of the associates of iodopentafluorobenzene with mesityl isocyanide, established by X-ray diffraction at the Research Park of Saint Petersburg University.

The formation of a halogen bond with a carbon atom is in itself an unexpected discovery, said Alexander Mikherdov, the first author of the paper, an Assistant Professor of the Institute of Chemistry at Saint Petersburg University. Most importantly though, the formation of this bond led to a substantial reduction of the extremely unpleasant odor of isocyanides in their adducts. Quantitative GC-MS studies indicate up to an almost 50-fold decrease in the air concentration of isocyanide, and thus a dramatic mitigation of odor. In practice, this means that isocyanides, in the form of their adducts, no longer require a ventilated fume hood or any special precautions to work with, instead becoming benchtop reagents. It makes the chemist’s job a lot easier!

In the future, isocyanide adducts such as those described in the study may prove to be a more convenient alternative to the usual ‘odorous’ isocyanides, since they could be stored without special precautions. The adducts can still be used in chemical transformations leading to various important compounds and materials.

The reseqrch was highlighted by the news outlet of the Royal Society of Chemistry — Chemistry World, and was included in the dayly digest of Nature Publishing — Nature Briefing. Totaly the article was mentioned by more than 25 international and Russian media sources.

The project is to develop a technology that can provide ultra-precise detection of tumors using fluorescence tomography with 633 and 785 nm medical lasers. In the future, the technology can be used for hyperthermal and photodynamic therapy (PDT), which will kill malignant cells. 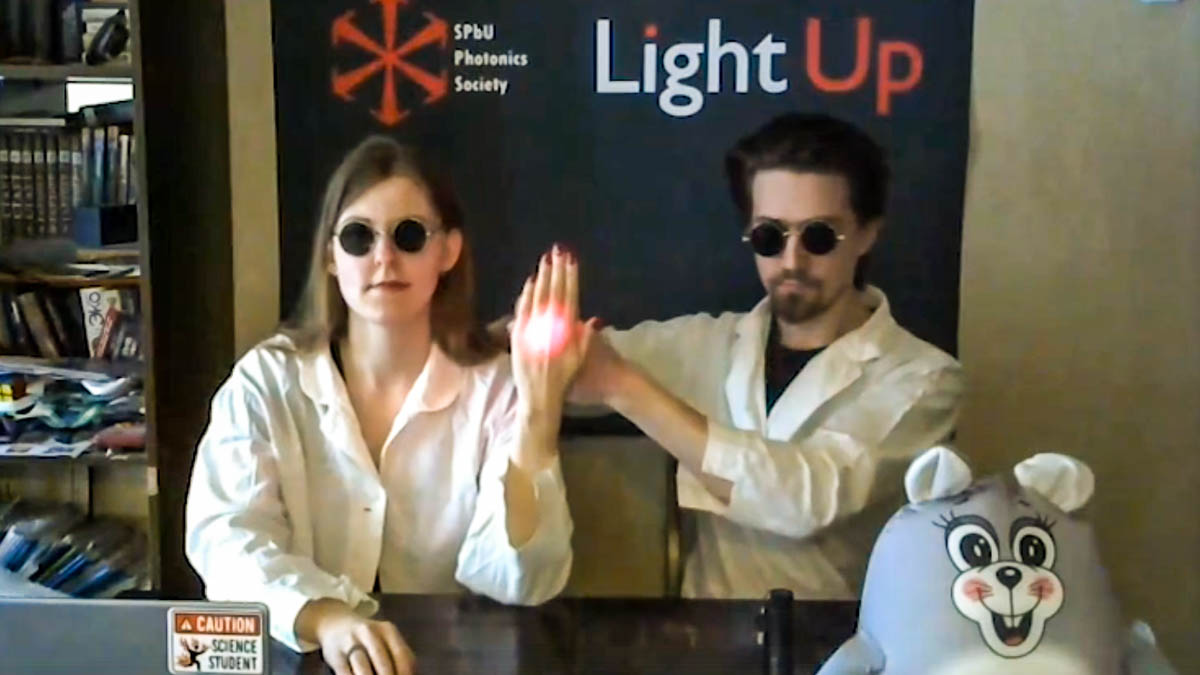 The team consists of graduate students of the Institute of Chemistry of St. Petersburg State University Aleksei Smirnov and Olga Odintsova, the Faculty of Biology Veronika Lashkul and the Higher School of Management Ekaterina Baranova.

The originality of the idea lies in the use of a special form of gold and silver nanoparticles (NP) that absorb light at the red border of the visible spectrum. This region coincides with the region of transparency of biological tissues. In other words, red and near infrared radiation pass through biological tissues. Under certain conditions, plasmonic NP can be used to selectively heat nearby cells. This will lead to the lysis of target cells due to hyperthermia and the formation of singlet oxygen (PDT).

Scientific adviser of the project "Light Up" — Assoc. Prof. Dr. Elena V. Solovyeva (Department of Physical Chemistry) St. Petersburg State University, leads the research group of the Surface Enhanced Raman Spectroscopy (SERS) in the laboratory of the Prof. Dr. of Chemical Sciences K.N. Michelson. For many years, the scientific team has been studying amino and mercapto-substituted photoactive compounds that can bind to the surface of gold and silver NP.

Co-leader of the "Light Up" project for biological research, Dr. of Biological Sciences Vladimir V. Sharoiko — Leading Researcher of Pavlov First State Medical University of St. Petersburg. Together with V.V. Sharoyko The "Light Up" project team has planned vectors for targeted delivery and objects for preclinical trials.

The competition "Start-up SPbU — 2020" is annually held by the Endowment Fund SPbU. This year 20 teams participated, of which 9 competed for prizes in the final on June 3.