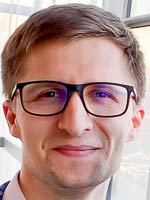 Dmitrii S. Bolotin was born in 1990 in Leningrad (now Saint Petersburg). After graduating from the academic gymnasium SPSU in 2007, he was accepted to Chemical department of SPSU (now Institute of Chemistry SPSU) without examinations. He obtained his Diploma with distinction in 2012 and then doctoral degree in 2014 (ahead of time). He started his career from assistant professor position (2014–2016) and then consequently reached positions of adjunct professor (2016–2018), associate professor (2018–2022), and full professor (since 2022). He obtained his post-habilitation DSc degree in 2019. After 14 years of work in a scientific group of Academician RAS Prof. Kukushkin V.Yu., in 2021 he started his independent career and created scientific group focused on organocatalysis.