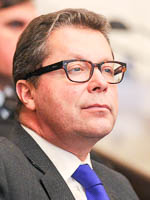 This email address is being protected from spambots. You need JavaScript enabled to view it.

Vadim Yurievich Kukushkin was born in 1956 in Leningrad (now Saint Petersburg), Russian Federation. He studied chemistry at Lensovet Technological Institute (Technical University), where he obtained his Diploma with distinction in 1979 and doctoral degree in 1982. Following two years at the industrially oriented Mekhanobr Institute (Leningrad), he joined the faculty at Saint Petersburg State University (1984). He obtained his post-habilitation DSc degree in 1992, was appointed full Professor in 1996 and became head of the Department of Physical Organic Chemistry in 2007. He is a corresponding member of the Russian Academy of Sciences (elected 2006), foreign member of the Academy of Sciences of Lisbon (Portugal; elected 2011), invited chair professor at the National Taiwan University of Science and Technology (since 2007). He is vice-president (elected 2016) of the Russian Chemical Society and the chairman (since 2012) of the Saint Petersburg branch of this society, member of the Councils of the Russian Foundation for Basic Research (2008–2016), Grant Commission of the Government of the Russian Federation (since 2012), and the Russian Science Foundation (since 2014; coordinator in chemistry since 2017). Prof. Kukushkin is a recipient of numerous prizes for his achievements in science and teaching. His research interests include platinum group metal chemistry, ligand reactivity, non-covalent interactions, organic synthesis involving metal complexes, and catalysis. He is an author of ca. 350 original papers, patents, reviews, as well as two books and a number of book chapters.