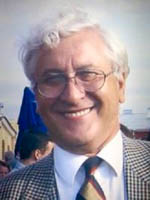 Igor’ Vasil’evich Murin was born in Leningrad. He was graduated from the Lensovet Leningrad Institute of Technology, Nuclear Physics Department. He has had his postgraduate education at Faculty of Chemistry of Leningrad State University. From the year of 1963 he has related his professional career with the University. The steps of which are postgraduate student, junior researcher, senior researcher, associate professor, professor, dean of Faculty of Chemistry (1984-1989), Vice-Rector for Academic Affairs (1996-2000), Senior Vice-Rector (2000-2006).

He is a head of the Solid State Chemistry Department from 1989.

I. V.Murin is the leading specialist in the fields of solid state chemistry and chemical material science. He is one among the founders of the promising branch of condensed state chemistry – solid state ionics. Murin’s scientific school implements the fundamental studies discovering a nature of superionic conductance of inorganic materials in crystalline, glassy and nanostructured states. Up-to-date theoretical and experimental techniques are used. Physico-chemical and nuclear physics approaches such as radiospectroscopy, EXAFS, impedometry, diffusion measurements, high pressure techniques are among them. Under the leadership of I.V.Murin computer simulation methods are successfully developed. Ionic transfer and structural disorder in inorganic, polymeric and hybrid materials are under these investigations. The results obtained in the way are especially useful in determination of searching criteria for novel superionic conductors. Modern computer technologies - parallel calculations by computer clusters – are in active use.

The most efforts of Murin’s research group are in the production and study of superionic conductors and ion-conductive membranes with conductivity by lithium, silver, fluorine, chlorine, sulphur, oxygen, nitrogen and hydrogen ions. Nanoionic composite materials based on carbon nanotubes are also of group interests. The great attention is paid for the development of synthesis techniques and for the complex study of ceramic composite materials based on carbides and nitrides of zirconium, hafnium and titanium. The materials have a high durability and electrophysical features. The relevance and originality of the efforts are confirmed by a great amount of international and Russian grants (RFBR, INTAS, NOW (Holland), NATO, St.-Petersburg State University grants etc).

I.V.Murin was an invited lecture professor of a number of Russian universities and universities of USA, Germany, France, Spain, Italy, Greece, Israel, Singapore et al. on the topics of solid state chemistry and solid state ionics. He was participant and among organizers of major international scientific conferences. I.V. Murin was a supervisor of above 35 Ph.D. and Dr.Sci. theses. Post-graduate students from Germany, Viet-Nam, Libya, Israel, China have carried out their theses under his leadership.

He is an author over than 400 research works.

I.V.Murin is the chairman of a dissertation board for defense of doctoral theses, the chairman of the Collegium of honorary professors of SPbSU, the chairman of the Russian association “Solid State Ionics”, Counselor of the international organizations and associations ”Reactivity of Solids” and “Solid State Ionics”, a member of editorial boards of a number of Russian and international scientific editions. He is a member of Training and Methodology council on “Chemistry, Physics and Mechanics of Materials” of UMO for classical university education, participant of the committee on ethics of the SPbSU Academic Council, Expert and Advisory board of the Legislative assembly of Leningrad district, voluntary board of Transport Administration of Russian Ministry of Home Affairs on North-West Federal Region.

I.V.Murin was awarded by many badges of honor and letters of commendation of Russian and international organizations, including Council on cooperation in educational sphere of Union of Independent States, Legislative assembly of Leningrad district, All-Russia Olympic board. He was decorated with the medal of the order “For merits before Fatherland” of 2-nd degree.